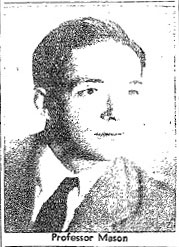 When exploring the Memorial Drive frontage of Baker House, students have discerned and been somewhat puzzled by a small ladder of curious dimensions, leading to a first floor window. While much too large to be of service to a mouse who forgot his key, the ladder is also far too dainty to assist a human burglar in the pursuit of his nocturnal routine. Careful observation and study of the situation has led some to the correct conclusion that the ladder is just about right for a medium-sized feline. This is as it should be-for Minnie is an ordinary, well-rounded, red-blooded All- American cat.

As Minnie utilizes his private ladder and ultra-modern mechanical door to enter his domain, he is, at the same time, entering the domain of Dr. and Mrs. Sam Mason, who will be the faculty resident family at Baker House for the next two years. New to Baker House this semester, the. Masons moved to the M.I.T. campus from a house in Newton. Their Baker apartment consists of three refurnished doubles, one single, and an assortment of would-be broom closets and miscellaneous rooms. With a shiny new decor and Mrs. Mason's fine touch, the apartment rates comparison with some of the best in Cambridge.

Dr. Mason's official task is to be in residence at Baker, and do nothing more. He has no disciplanary powers, or lectures to give, except for the daily tasks imposed by his position on the Electrical Engineering faculty. But he is not expected to freeze into his apartment for two years and watch things pass as they may. He is doing his best to become personally acquainted with each Baker resident; the students are always welcome to drop in on the Masons, as many do. Dr. Mason's most pleasant personality is even furthered by one of the greatest social assets a man might wish to have - he is purported to be the best ping-pong player in Baker House.

The Masons have found life in Baker House pleasingly serene and peaceful. Dr. Mason has never yet been mistaken for a freshman and taken for a ride to Saskatchewan. Although it could happen because he mixes so naturally with the undergraduates, who, within the walls of Baker House, need not call him “Dr. Mason.”

Dr. Mason was graduated from Rutgers with a B.S. in EE in 1942; he then moved on to the Institute to take part in government research in the radiation lab. He received his M.S. here in 1947, added his Sc.D. in 1952. He was appointed to the Institute staff in 1945.

Mrs. Mason is a native New Englander from Newton, formerly a dancing teacher. The Mason family now seeks a solution to a prevailing minor calamity. Although Mrs. Mason was an instructor, neither of the Masons, in fact, not even Minnie, can do the mambo. This makes them feel like, to use the words of Li'l Abner, “soshul leopards.” Any “Tech man” who has in some degree mastered the mambo is requested to contact the Masons at Baker. Dr. Mason emphasized that this is a sincere request for aid.

The Masons hope to remain at the Institute for a long time. Dr. Mason is proud of his affiliation with this school and equally proud of the way the greater number of the students respond to what he calls the liberal policies of our school.

Professor Mason ranks high among the faculty members who joined the Department of Electrical Engineering after World War II. He was an outstanding lecturer and researcher, a strong contributor to the department's major curriculum revision of the l950's, and a warm friendly man who took great personal interest not only in MIT students but in all young people.

Born in New York City in l921, Professor Mason grew up in a small town (population 26) in New Jersey. In 1942 he received a B.S. degree in electrical engineering from Rutgers University. Immediately thereafter he came to Cambridge and joined the Antenna Group of MIT's Radiation Laboratory, where he continued as a staff member until the end of the war. He received his S.M. and Ph.D. degrees in electrical engineering in l947 and l952. He joined the department faculty in 1949, serving as assistant professor through l954, as associate professor through l959, and as full professor until his untimely death in l974.

Professor Mason's doctoral dissertation was on signal flow graphs. These represented an innovative approach to electric-circuit and feedback theory, and formed the basis for a new graduate-level subject. Among his contributions in circuit theory was the concept of unilateral gain, a useful tool for describing linear amplifiers.

During the department's undergraduate curriculum revision of the l950's, he introduced major innovations in the teaching of electric circuit theory. Two textbooks, co-authored with Professor Henry Zimmermann, emerged from this effort: Electronic Circuit Theory and Electric Circuits and Signals. After the retirement of Professor Ernst A. Guillemin in 1963, he assumed the mantle of leadership in the area of circuit theory at MIT. As part of a later curriculum revision, he incorporated digital signal analysis into undergraduate electric circuits. This work led to a third textbook, published jointly with Professors Athans, Dertouzos and Spann entitled Systems, Networks and Computations.

Professor Mason was an authority on optical scanning systems for printed materials, and on sensory aids for the blind. As leader of the Cognitive Information Processing Group of MIT's Research Laboratory of Electronics, he developed experimental systems that could scan printed materials, and read them aloud for the blind through electronically activated speakers. He also developed tactile systems, driven by photocells, to enable blind people to sense light. Professor Mason was appointed Associate Director of RLE in l967, and was further honored by being named Cecil H. Green Professor in l972.

Throughout his career, Professor Mason involved students heavily in his research. It was not unusual for him to have a half-dozen doctoral candidates under his supervision at one time. After graduation many of his students became faculty members at MIT or elsewhere. A gentle, compassionate man, Professor Mason had a deep, abiding interest in young people. His dynamic teaching commanded the admiration and respect of all of his students, and excited them to their highest level of performance. His wry sense of humor enlivened his lectures and endeared him to his colleagues and friends.

Outside the classroom he was equally inspiring. As one of his thesis advisees put it: “I came to know, admire and respect Professor Mason as a thinker, friend, personal advisor and confidant.” He and his wife Jean twice served as dormitory Faculty Residents, first at Baker House and later at Senior House.

He also served as Chairman of the Faculty Committee on Student Environment, and as a member of an ad hoc Institute and faculty committee on Education in the Face of Poverty and Segregation. Professor Mason worked intensively for several years with underprivileged youth in the Upward Bound program. In appreciation of these activities he was honored as the first recipient of the Institute's Gordon G. Billiard Award.

Professor Mason was known as a clear and imaginative thinker, whose flashes of insight opened new doors and substantially stimulated the work of others. It was once said that “he had more theoretical scope than most practical men and was more practical than many theoretical men.” Professor Mason was a member of Tau Beta Pi, Sigma Xi, and Eta Kappa Nu, and he was a Fellow of the IEEE.