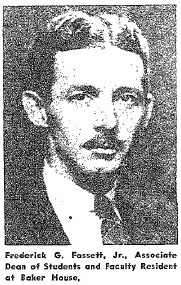 Frederick Gardiner Fassett, Jr., 1901-1991, A.B. 1923, A.M. 1927, Colby College; A.M. 1930, University of Maine, came to the Massachusetts Institute of Technology in 1930 as an instructor in the Department of English and History. He was named assistant professor in 1934 and associate professor in 1938. He was editor of the Technology Review, 1939-1945, then director of publications and public relations at Carnegie Institute of Washington from 1945 until 1951, when he returned to MIT as director of publications and of Technology Press. He was associate dean of students, 1952-1966.

To assist the donmitory student at times of need, the Institute administration has this year adopted a plan of having at least one faculty member residing in each dormitory unit. Professor Frederick G. Fassett, Jr. and his family are now living in Baker House in the Master Suite, which needed no alterations; Professor S. Curtis Powell, with an assistant, has moved into a recently remodeled suite in Munroe on East Campus; and Professor John Rule and his family plan to more into Burton House as soon as their apartment is completed.

Mr. Fassett came to the Institute from the University of Maine in 1930. He was appointed instructor in the Department of English and History, the same position he had held in Maine. In 1934, he was named assistant professor of English, and four years later became an associate professor.

Journalism has always been one of Mr. Fassett's chief interests. He instituted the journalism course at the University of Maine while an instructor there. During his early days at the Institute he served as chairman of the advisory council on publications, and in 1938 was appointed editor of the Technology Review. Today he is both Director of Publications and Director of the Technology Press

From 1945 until 1951, Mr. Fassett was director of publications and public relations for the Carnegie Institution at Washington, D. C. These years are the only ones since 1930 during which Mr. Fassett has not been here at the Institute.

Since his return to the Institute last year, Mr. Fassett has not only assumed the post of faculty resident at Baker House, but also was appointed Associate Dean of Students earlier this year, in addition to his publication duties. He does not believe that the fact that he is now so closely connected with the administration will hurt his effectiveness as faculty resident. By leaving his hat as dean behind when he enters Baker House, he believes that he can be merely a friend and advisor to the students on a completely unofficial basis. He emphasizes the fact that all conversations in his apartment are strictly confidential.

“Breaking the Ice” is Hardest

Mr. Fassett is being ably assisted at Baker House by his wife. Both of the Fassetts agree that one of their biggest problems is “breaking the ice,” and actually meeting the students. They have found that dinner is a very good time to do this, and have eaten many meals in the Baker House cafeteria with as many as fifteen students in the |group. As guests at the House dances, they have also met a good number of the students. They have held open house and given several dinners in their own apartment. They feel that they have been fairly successful in meeting most of the Baker residents, and are particularly happy when one of their previous callers returns with a friend.

When a student comes to Mr. Fassett with a problem, the two can retire into the privacy of a completely separated room to find the solution privately and confidentially. Mr. Fassett feels that his job is to listen, and give advice when it is asked, and not to preach. He and his wife have no authority at all in the dormitories, and greatly dislike the term “house master,” preferring “faculty resident.” They are solely responsible to the students who want help, and ask for it. Getting those who need help to come and ask for it is perhaps their hardest job. The Fassetts believe their work fills a long-apparent need here at the Institute,

Both Mr. and Mrs. Fassett greatly enjoy their position. They feel that they are learning along with the students how to keep the human element alive at the Institute. “It is,” says Mr. Fassett, “a fascinating, satisfying, but bewildering experience.”

<WRAP indent> “Dean and Mrs Fassett always have a warm spot in my heart. He bailed us out of jail, with money he borrowed from her. Richard Long and I went for a walk after a Saturday afternoon beer blast [my first experience with beer] freshman year. As the Charles seemed frozen solid, we decided to walk across it. We made it without difficulty to the Boston shore - then turned around and came back. The ice was at least an inch thick, and it was cold. When we arrived on the Cambridge shore, there were MDC cop cars with lights flashing, and a cop yelled down for us to get up here. We walked to the ladder and climbed up, were put in the cop car and sped off to jail. We were allowed one phone call, so we called Baker House and asked for Jerry Wiener - our ! freshman 'advisor'. Jerry wisely called Dean Fassett who came to the police station, bailed us out, got us a lawyer, accompanied us to court, and returned three times while we asked for continuances waiting for a sympathetic judge. Our major concern at the time was that Richard, a Course VI major, would someday need security clearance. When the right judge was there, he heard the cops testimony - we were disturbing the peace - and then pronounced us not guilty without our testifying. We were friends with the Fassetts from then on.” </WRAP>

<WRAP indent> “Parietal hours generated one of the classic quotations from our tenure at MIT. When Dean Frederick Fassett, Dean of Residence, was asked to extend parietals on Saturday nights from 1 am to 2 am, he declined, saying, “If you haven't done it by 1, you're not going to get it done by 2.” </WRAP>

<WRAP indent> Other famous quotes from the Dean's

A certain freshman got roaring drunk one Friday night to the point where the Campus patrol had to be called to carry him out of the shower where he had collapsed unconscious and take him to the infirmary for detoxification. He was released Saturday afternoon and returned to Baker House under his own power.

Sunday afternoon he got a note from Dean Fassett: Please see me in my office first thing tomorrow morning.

Trembling, he appeared at Dean Fassett's office at 8:30. The conversation went something like this: